In a ruling of 22 April 2010, the German Federal Court of Justice (BGH) approved Daimler AG's action based on its community designs (EU design law) against a manufacturer of extended and armored vehicles, which are "designed" and manufactured on the basis of Daimler AG production vehicles (omission, exchange of information, compensation).
In the specific case, it was about a vehicle that was extended by about 135 cm. The designs of Daimler AG were judged by the BGH to be novel and individual. There was no ground for exclusion due to the technical conditionality of the design features. According to the appellate court's description, the lawsuit designs had seven distinctive features that gave the impression of an elongated limousine with rounded shapes and a bold appearance.

According to the BGH, the degree of design freedom of the designer in the development must be taken into account when assessing the individuality according to Art. 6, paragraph 2 GGV. The individuality is moreover to be determined on the basis of an individual comparison with the previously known designs.

It is not appropriate to combine design features from various previously known designs and to deny the individuality of the lawsuit design in question based on an overall comparison with the previously known ensemble of features, as the TSC had argued with reference to design features of earlier versions of the S-Class of Mercedes and Maybach. Furthermore, Community Design No 000012869-0001 (shown here), which reproduces the standard version of the S-Class W 221 series, was also not attributed to the previously known ensemble of features because of its later announcement.

With regard to the question of infringement, the BGH ruled that the motor vehicle produced by the defendant bearing the designation "C. armored limousine 53" was almost identical in design with the lawsuit pattern No 000173166-0007, the only discernible difference in the additional bridge in the central part of the carriage of the lawsuit pattern grants no particular weight from the point of view of an informed user and a possible difference in the length of the vehicles is not noticeable. 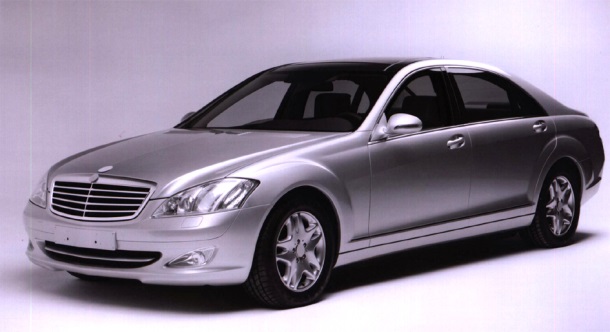