Why the selling price of a circular, water-repellent film can be more than 100 times the manufacturing cost

An invention need not be complicated in order to obtain protection. Even inventions that seem simple at first glance can and should be protected, as the example of DropStop® shows.

The DropStop® is just a circular, flexible and water-repellent film with a sharp-edged contour. Rolled up, this film can be inserted into a bottleneck and used as a spout. It prevents drop formation during the settling of the casting process. The production costs of the DropStop® amount to a few centimes per piece. Nevertheless, the DropStop® was sold for more than 5 CHF each after its market introduction. The reason for this was the simplicity of the invention and patent protection. Both factors were decisive for the worldwide, high-margin market success.

The basic idea of ​​a spout was actually already known in 1959 as French patent FR1198362. However, this spout was too complex and complicated to use. Although there was patent protection, the "original spout" did not prevail on the market (see adjacent drawing [above] from the cited French patent specification).

Nearly three decades later, inventor Brian Vang Jensen realized that it was much easier.  He reduced the shape of the spout to a minimum and the circular DropStop® was born. It was patented in 1990 (EP0560777) (see adjacent diagram [below]).

However, the simplicity of the idea alone would not have been successful: a circular film is easy to copy. However, the patent protection granted him a 20-year monopoly and, accordingly, he was free to set the price for a DropStop®. And finally, clever marketing contributed to the success of the DropStop® brand. 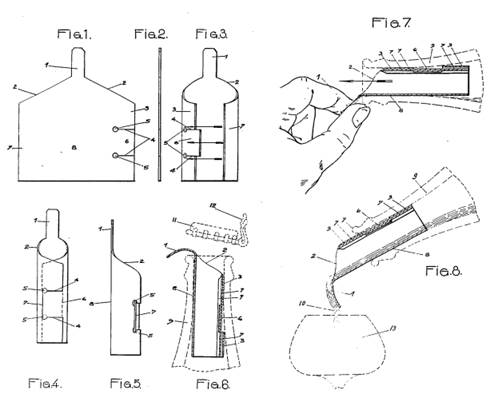